A Farmer's Guide to the Barn Raise

A comprehensive overview of the Barn Raise mechanics.

Last updated July 1st, 2022. A new guide with updated terminology per BFP-79 will be released soon.

On August 6, 2021, Beanstalk was first planted by Publius. Beanstalk, while still early in its life, grew to produce over 100 million Beans over the first 6074 Seasons (~8.5 months).

On April 17, 2022, Jack chopped down Beanstalk. The foundations are still there, but Beanstalk must be Replanted in order to continue.

In order to support the Replant, Beanstalk will host the Barn Raise — a fundraiser to restore $77M in non-Bean liquidity stolen from the Silo — starting Monday, June 6 at 4:00pm UTC.

In order to align new capital with pre-exploit Farmers, all pre-exploit Beans and LP Tokens will become Unripe Beans and Unripe LP respectively upon Replant. Unripe assets represent a pro rata share of the underlying assets minted as Fertilizer is sold and debt repaid to Fertilizer. Ripening is the process of burning Unripe Beans in exchange for Beans, or burning Unripe LP in exchange for LP Tokens. Unripe assets are subject to a vesting schedule.

Unripe assets can be Deposited, Withdrawn, Claimable, or Circulating (see Glossary for definitions). Only Circulating Unripe assets can be Ripened. Unripe assets will be distributed upon Replant in the same state in their pre-exploit state, with the exception of Withdrawn assets that will be distributed as Claimable (as if the Withdrawal timer had elapsed). Farmers who had Beans deposited in Pod Orders pre-exploit will receive Claimable Unripe Beans and their Orders will be Cancelled. Pod Listings will stay open by default and Farmers will have an opportunity to Cancel them before Replant.

Stalk and Seeds will be distributed based on the percentage of Fertilizer sold at the time of the Replant, and any remaining Stalk and Seeds balances will vest as more Fertilizer is sold. Pods stay the same as pre-exploit.

As an example, if 20% of Fertilizer is sold before Replant, pre-exploit balances of:

would then become the following when Beanstalk is Replanted:

These examples work the same way for Unripe LP.

The vesting for pre-exploit Stalk and Seeds is a bit different. Stalk and Seeds simply unlock based on the percentage of Fertilizer that has been sold. This makes the Silo a more attractive destination for new Silo Members early on after Replant. As Stalk and Seeds vest, they need to be manually claimed to become active and start receiving Farmable Beans and Farmable Stalk.

New Silo Deposits after Replant are not subject to any vesting schedule. Neither are Farmable Beans, Harvestable Pods, or Fertilized Beans (the Beans earned from Fertilizer).

The above only plays out if LP Tokens are forfeited, because it’s the liquidity that is being recapitalized by Fertilizer sales. If someone forfeits Beans, that just makes the Unripe Beans vest earlier.

There are edge cases where it is possible for Unripe assets to Ripen for >100% of their pre-exploit balance. In order for this to happen, the non-Bean amount of forfeited LP Tokens must exceed the amount of Fertilizer left for sale.

For example, if Fertilizer is sold out and then someone forfeits their Unripe LP, anyone who doesn’t Ripen until 100% of the debt is repaid Fertilizer will receive >100% of their pre-exploit balance when fully vested.

The interest rate on Fertilizer is called Humidity. 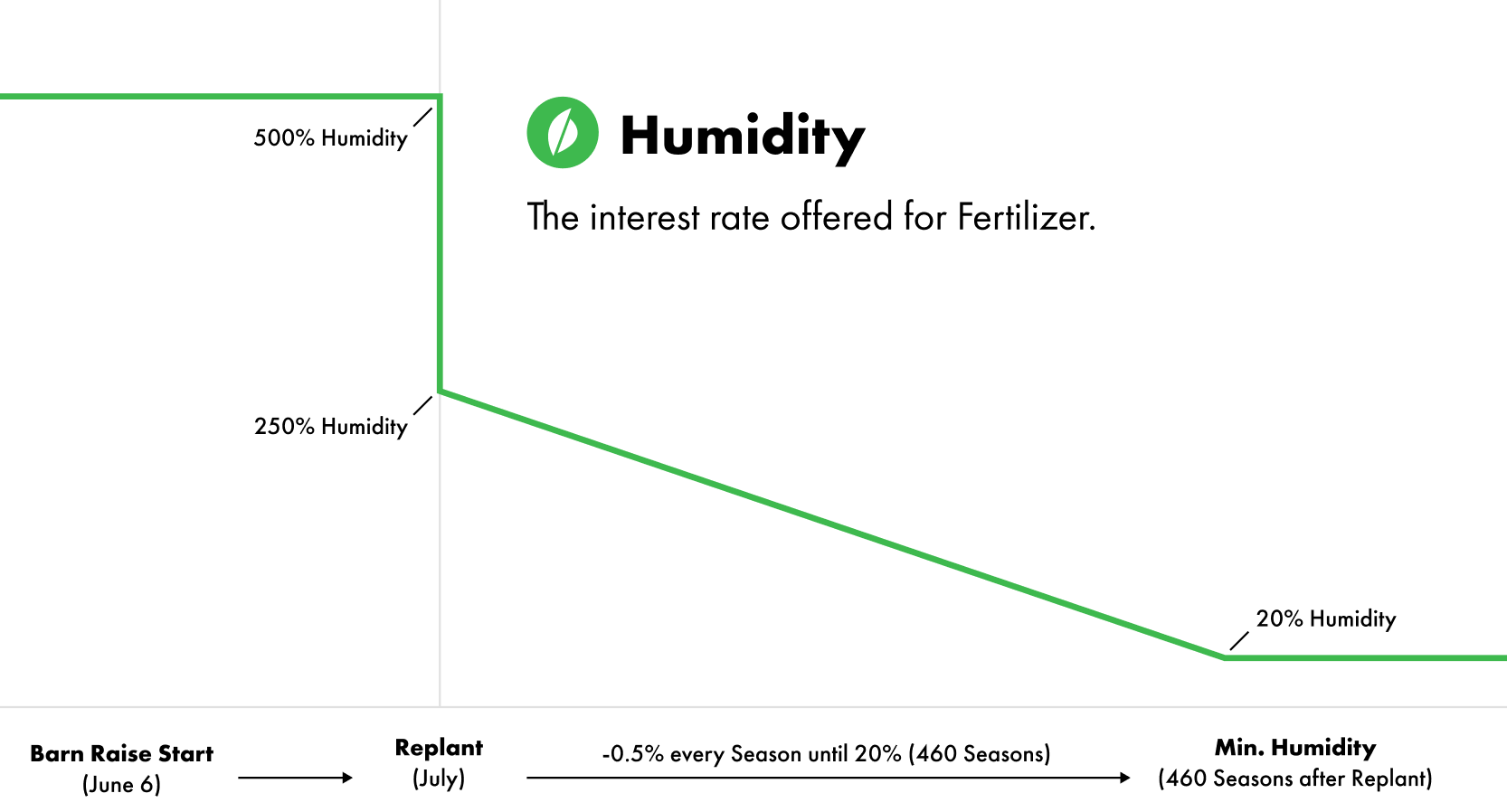 By rewarding early participation in the Barn Raise and having the reward drop off quickly, demand for Soil and the Silo increases as Fertilizer becomes less attractive. This will facilitate the incentive structures created by Beanstalk to quickly return to a relatively similar state to prior to the attack.

There are 3 states Fertilizer can be in: 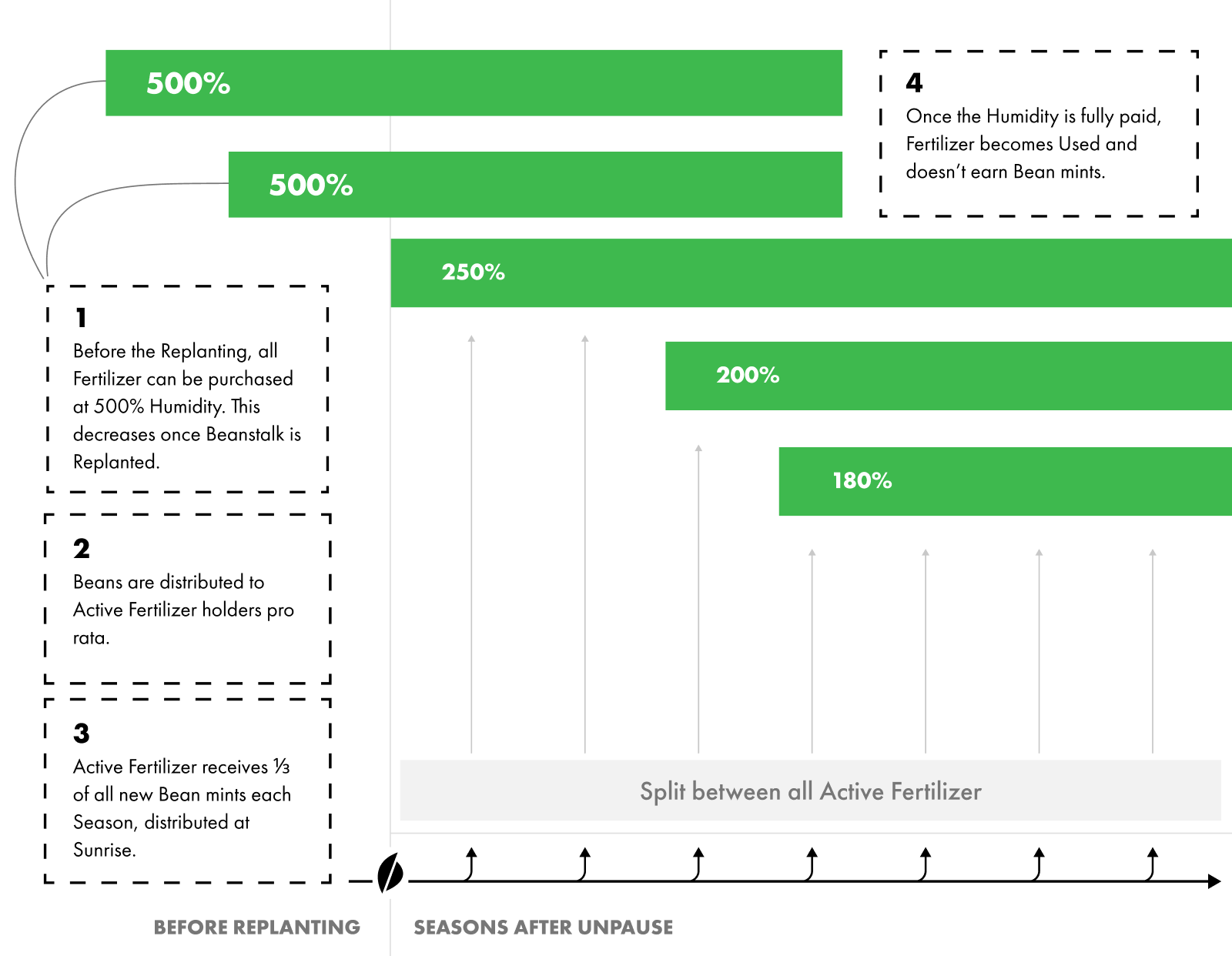 The vesting schedule tied to the product of Fertilizer sold and Fertilizer paid back minimizes the new supply from vesting assets even in the instance there are extended periods of minimal demand for Fertilizer.

Fertilizer will be ERC-1155 tokens with the Season of purchase as the unique identifier.

In order to commemorate early participation in the Barn Raise, separate ERC-721 NFTs with distinct artwork will be available for mint for Farmers who purchase Fertilizer before the Replant (between June 6 and late July—the exact date of the Replanting will be voted on by the Beanstalk DAO).

The minimum participation size for getting an NFT is 1000 USDC, and these NFTs are limited to the first 10,000 transactions of at least that minimum.

Minting of the NFTs will be optional to minimize gas costs to participate in the Barn Raise.

If Beanstalk is Replanted before Fertilizer sells out and Silo Members Convert from Unripe LP to Unripe Beans when P < 1, then the amount of recapitalized liquidity required to make everyone whole decreases (because the liquidity is decreasing).

Vice versa, if Beanstalk is Replanted before Fertilizer sells out and Silo Members Convert from Unripe Beans to Unripe LP when P > 1, then the amount of recapitalized liquidity required to make everyone whole increases (because the liquidity is increasing). This is acceptable as this scenario only plays out when P > 1 (a good problem to have). The ceiling on the amount of Fertilizer for sale would be about half the Unripe LP if all Unripe Beans were Converted.

If P < 1, they would also have the option to Convert their Unripe LP to Unripe Beans. Assuming the delta in the liquidity pool is 20 Beans below peg, then they can take their 100 Unripe LP and Convert all of it into 100 Unripe Beans, and the price will return to 1. This is because in reality, only 20 LP Tokens was converted to 20 Beans.

Because there are only approximately 30M Beans, this imposes an upper bound on Fertilizer of ~92 million.

The forfeiture of Unripe LP during the vesting schedule also reduces the amount of liquidity that needs to be raised, and thus the amount of Fertilizer for sale.

This Barn Raise structure doubles down on the core economic mechanism that got Beanstalk to this point. It is up to the market to decide if Beanstalk deserves to exist—and these difficult endogenous circumstances give Beanstalk the opportunity to prove itself even more in the midst of exogenous market turmoil.

Technical explanations for the curious Farmer

Ok, so how exactly does the vesting work and where are the Ripenable assets coming from? Let’s walk through an example.

Let’s say someone buys 100 Fertilizer for 100 USDC, and this is the only Fertilizer sold so far. At a high level Beanstalk does two things—it recapitalizes pre-exploit LP Tokens and pre-exploit Beans.

At this point, none of the LP Tokens or Beans in their underlying pools are vested, or Ripenable, because the amount of debt repaid to Fertilizer is still 0%.

Let’s say there is a delta surplus of 300 Beans in the liquidity pool at the end of the first Season. 100 Beans each go to Silo Members, the Pod Line, and Fertilizer holders. At this point, the penalty for Ripening would be <100%, because a non-zero amount of debt has been repaid to Fertilizer holders.

Unripe Beans: An ERC-20 token that entitles pre-exploit Bean holders to a pool of vesting Beans. These vesting Beans are minted as debt to Fertilizer holders is repaid.

Unripe LP: Same as Unripe Beans but for LP Tokens.

Deposited asset: Beans or LP Tokens that are Deposited in the Silo.

Withdrawn asset: Beans or LP Tokens that have been Withdrawn from the Silo and the Withdrawal timer has not elapsed (once this has elapsed, the assets become Claimable).

Claimable asset: Beans or LP Tokens that are wrapped in the Beanstalk contracts. These assets can be Deposited in the Silo, Claimed and moved to the user’s wallet, etc.

Circulating asset: Beans or LP Tokens that are in users’ wallets.

Fertilizer: Tokens offered by Beanstalk throughout the Barn Raise that receive one-third of new Bean mints.

Humidity: The interest rate for Fertilizer. Like the Weather, this changes depending on the state of Beanstalk.