Spilling the Beans is a series where Beanstalk community members discuss their backgrounds, how they first got Bean-pilled, and their preferred Bean yield strategies. 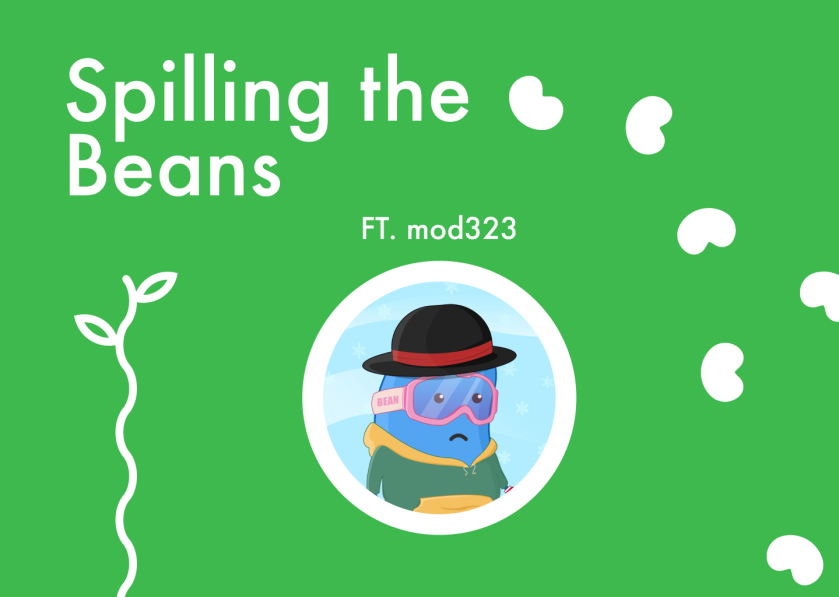 Welcome to the first volume of Spilling the Beans, where members of the Beanstalk community spill the Beans on their backgrounds, how they first got Bean-pilled, and their preferred Bean yield strategies.

Disclaimer: none of this is financial advice. I am simply highlighting popular Beanstalk farming strategies that community members personally employ.

Beanstalk is the most successful decentralized credit based stablecoin in history. With 3500+ peg crosses in the 7 months since its inception, Bean has started to prove itself as DeFi’s key to unlocking a scalable, decentralized stablecoin market.

For more information on how Beanstalk works and the mechanisms behind it, check out this straightforward introduction.

Spilling the Beans with mod323

Last week I had the pleasure of talking shop with Beanstalk Farm’s Partnerships Lead - mod323.

Though mod only discovered Beanstalk in December 2021, he has been tracking the broader blockchain ecosystem since its earliest days. Like many, mod was a passive—and regretful—observer of Bitcoin in the early 2010s. He only truly entered the space much later in 2019, right at the start of DeFi’s meteoric rise to prominence.

mod was immediately enraptured by all the innovation and opportunity that DeFi had to offer, but he never truly found his home until he stumbled across Beanstalk when it was mentioned in another crypto Discord server.

After doing extensive research on the protocol, he became a dedicated Bean farmer and a core contributor to the community. mod had never seen anything like Beanstalk before, nor had he ever been so early to a promising project.

This doesn’t come as a particular surprise based on his past history, either. Mod has a background in process control—loosely defined as “the ability to monitor and adjust a process to give a desired output.”

Process control is exactly what Beanstalk does.

Build, monitor, and adjust the various processes controlling the Bean supply to maintain a stable peg to the U.S Dollar. Once mod understood the process behind Beanstalk and Bean, he was completely Bean-pilled. After all, if someone with his extensive background couldn’t find major flaws in the process, who could?

Before Beanstalk, mod wasn’t a particularly risky individual. He never borrowed or used lending protocols. Though he had dabbled in yield farming, he preferred the age-old “buy and stake” strategy common with early crypto investors. If he doesn’t understand a project, he doesn’t buy in. That’s just who he is.

“There’s an unmatched potential for opportunity and growth in Beanstalk. I understand and invest in it.”

Upon a little digging, mod made it clear that he understands and identifies with the problem Beanstalk is trying to solve and firmly believes it is the best solution.

He talked constantly about why the two-part Field/Silo model is genius. Though the technical/mathematics section of the whitepaper is most-often overlooked by newcomers, it is mod’s bread and butter.

More than anything, he was excited by the protocol’s groundbreaking economics and elegant levers used to maintain Bean’s peg.

The math checks out. That’s all he needed.

It’s clear that mod is passionate about Beanstalk. It was evident throughout my conversation with him, but it’s also obvious in his continuous dedication to spreading the word about Bean.

Whether by educating newcomers one-by-one on the Beanstalk discord, helping promote Bean tweets, or finding opportunities for other crypto projects to leverage Beanstalk’s innovative levers as Beanstalk Farm’s Partnerships Lead—mod is an incredibly valuable member of the Beanstalk community.

I was curious to know how he splits up his portfolio to earn Bean yield. It’s one thing to work on the protocol and believe in it, but it’s another to optimize your trading strategy around it.

“I’ve literally done everything there is to do in Beanstalk.”

It was very on-brand of mod to say something like this.

If he doesn’t understand something, he doesn’t buy in. It only makes sense that he’s experimented with all the yield options on Beanstalk.

He’s currently in the Silo passively earning Stalk, he’s Sowed Beans in the Field to lock in sky-high interest rates on future Pod repayments, and he buys Pods off the fast-growing Pod marketplace. One could even say Mod is a connoisseur of Bean yield—he likes all the options.

My question exactly. He might’ve tried everything, but I wanted him to spill the beans on what’s best—and why.

At first, he resisted the question. He understands why any option might be more attractive than the other. The Silo accumulates Stalk and Seeds, the Field offers incredibly high interest rates, and the Pod marketplace has arbitrage opportunities—mod’s reasoning was crisp, clear, and entirely impersonal.

Context: The Beanstalk community has recently been working on a yield curve for the Pod marketplace to get a sense of the fair market value of Pods based on their place in line. The idea is that there might be arbitrage opportunities for undervalued Pods.

What does mod prefer?

There’s no other way to put it. mod loves the Silo. Big Silo guy for sure.

And like always, there’s a very clear-cut logical reason for it. One that almost Silo-pilled me if I wasn’t such a Pod degen—Sown or arbitraged.

For mod, the Silo represents compounding income. The interesting thing about Beanstalk is that nobody, regardless of whether they’re in the Silo or Field, gets paid out unless the price of Bean is greater than $1. That’s when all the magic happens.

For mod, this means the Silo is the most consistent option to continuously gain an advantage and set himself up for further yield. Even if Beanstalk takes a long time to pay out, Silo depositors continuously earn Stalk. Half of all Bean mints are distributed to Silo Members proportionately based on their Stalk, making it a great way to maximize yield.

Put simply, being invested in the Silo and continuously earning Stalk allows you to capture Bean’s growth. For someone like mod who thinks Bean’s supply trajectory is in the billions, the Silo is a safe and consistent option.

Note: In the future, Beanstalk Farms aims to convert Stalk to a liquid, tradable ERC-20 token, making the SIlo even more attractive.

True to his Silo obsession, mod admitted to me that he has about 65% of his Bean holdings in the Silo. His remaining portfolio consists of pods that were sown directly for a predetermined Weather rate. When I asked why he barely bought any Pods on the marketplace, he hit me with an answer classic to protocol veterans.

“The Pod marketplace simply didn’t exist at that time.”

That said, mod also thinks that the interest rate offered by the protocol is more attractive than the Pods on the marketplace.

To mod, very few of the Pods on the marketplace are currently undervalued. However, this might change as soil becomes scarce and pods are only available at the marketplace.

A Logical Pioneer. A High-Conviction Player.

mod is a voice of calm and reason in the Beanstalk community. His passion for the protocol and the Bean stablecoin shines through in everything he touches.

More than anything, mod is a builder working to bring the Beanstalk protocol to the forefront of DeFi. He’s given us his take on the best way to earn yield from the most successful credit based stablecoin protocol in history.

I think we can all learn something from that.

Beanstalk is a decentralized protocol that allows anyone to realize the value of an open, credit based stablecoin. The Beanstalk community of lenders, borrowers and savers secures a protocol-native stablecoin, Bean, with the goal of creating the most accessible digital money system. By eliminating collateral requirements, Beanstalk is the catalyst for a trustless solution that unlocks the potential of decentralized finance for everyone. Learn more at bean.money.